All the doctors throughout time 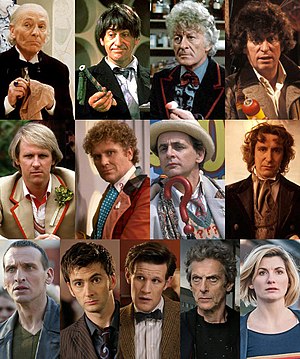 From the 1st to the 13th the doctors have changed throughout time and had many different faces.


The Producers introduced the concept of regeneration to recast the main character. This was prompted by the poor health of the original star, William Hartnell. The term "regeneration" was not conceived until the Doctor's third on-screen regeneration; Hartnell's Doctor merely described undergoing a "renewal", and the Second Doctor underwent a "change of appearance". The device has allowed for the recasting of the actor various times in the show's history, as well as the depiction of alternative Doctors either from the Doctor's relative past or future.
The epicsodes The Deadly Assassin (1976) and Mawdryn Undead (1983) established that a Time Lord can only regenerate 12 times, for a total of 13 incarnations. This line became stuck in the public consciousness despite not often being repeated, and was recognised by producers of the show as a plot obstacle for when the show finally had to regenerate the Doctor a thirteenth time. The episode "The Time of the Doctor" (2013) depicted the Doctor acquiring a new cycle of regenerations, starting from the Twelfth Doctor, due to the Eleventh Doctor being the product of the Doctor's twelfth regeneration from his original set.
Although the idea of casting a woman as the Doctor had been suggested by the show's writers several times, including Newman in 1986 and Davies in 2008, until 2017, all official depictions were played by men. Jodie Whittaker took over the role as the Thirteenth Doctor at the end of the 2017 Christmas special, and is the first woman to be cast as the character.
These are all the doctors and how many seasons they had:

Find out more of the compainions