Every compainion of Doctor who 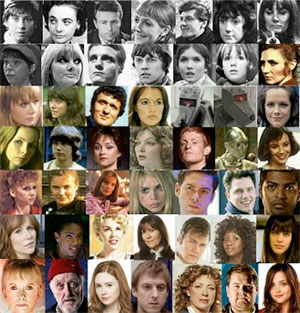 The companion figure is generally a human or has been a constant feature in Doctor Who since the programme's inception in 1963. One of the roles of the companion is to be a reminder for the Doctor's "moral duty". The Doctor's first companions seen on screen were his granddaughter Susan Foreman (Carole Ann Ford) and her teachers Barbara Wright (Jacqueline Hill) and Ian Chesterton (William Russell). These characters were intended to act as audience surrogates, through which the audience would discover information about the Doctor who was to act as a mysterious father figure. The only story from the original series in which the Doctor travels alone is The Deadly Assassin (1976). Notable companions from the earlier series included Romana (Mary Tamm and Lalla Ward), a Time Lady; Sarah Jane Smith (Elisabeth Sladen); and Jo Grant (Katy Manning). Dramatically, these characters provide a figure with whom the audience can identify, and serve to further the story by requesting exposition from the Doctor and manufacturing peril for the Doctor to resolve. The Doctor regularly gains new companions and loses old ones; sometimes they return home or find new causes or loves on worlds they have visited. Some have died during the course of the series. Companions are usually human, or humanoid aliens. Since the 2005 revival, the Doctor generally travels with a primary female companion, who occupies a larger narrative role. Steven Moffat described the companion as the main character of the show, as the story begins anew with each companion and she undergoes more change than the Doctor.The primary companions of the Ninth and Tenth Doctors were Rose Tyler (Billie Piper), Martha Jones (Freema Agyeman), and Donna Noble (Catherine Tate) with Mickey Smith (Noel Clarke) and Jack Harkness (John Barrowman) recurring as secondary companion figures.The Eleventh Doctor became the first to travel with a married couple, Amy Pond (Karen Gillan) and Rory Williams (Arthur Darvill), whilst out of sync meetings with River Song (Alex Kingston) and Clara Oswald (Jenna Coleman) provided ongoing story arcs. The tenth series introduced Pearl Mackie as (Bill Potts), the Doctor's first openly-gay companion. Pearl Mackie said that the increased representation for LGBTQ people is important on a mainstream show.